What and where are the Dry Tortugas? How to reach them?

Yankee Freedom III is the most economical way of reaching the Dry Tortugas. Day visitors and campers can board the ferry from Key West Ferry Terminal in the Historic Seaport. The ferry ticket includes complimentary breakfast, lunch, snorkel gear and fins. Drinking water and fresh water showers are available on the ferry. The ride takes about 2 hrs and 15 mins.

We took the ferry to reach the Dry Tortugas. The cabin was large and spacious with wide windows. The upper deck was open to the sea and great place to experience the sea air. The food and drinks were also good. The crew was helpful; overall it was an enjoyable experience.

When to visit the Dry Tortugas?

Dry Tortugas experiences two seasons. Winter season runs from November to April. This is also the low season when fewer visitors visit the Dry Tortugas due to high winds, rough seas, turbulent waters and poor snorkeling visibility. Summer or the high season is from May to October. The islands experience little to no winds and conditions are perfect for swimming, snorkeling and kayaking. However frequent hurricanes and tropical storms are also a characteristic of the summer season and visitors need to remain informed about expected weather conditions. Ferry reservations might need to be booked days in advance in both seasons during weekends and holidays.

How did the Dry Tortugas get their name?

A group of Spanish explorers led by Juan Ponce de León discovered the Dry Tortugas in 1513. The islands and surrounding waters were home to several big sea turtles hence Ponce de Leon called them ‘Las Tortugas’, Spanish for ‘The Turtles’. His crew is said to have captured over 160 sea turtles for their meat. The islands later came to be called the Dry Tortugas to indicate to other seafarers that the islands have no source of surface fresh water.

The islands or keys are low and irregular; there are 7 main keys that comprise the Dry Tortugas. The Dry Tortugas Lighthouse is located on Loggerhead Key which is the largest island. The lighthouse was decommissioned in Dec 2015. Fort Jefferson and the decommissioned Garden key lighthouse are on the second largest island, Garden Key. Garden Key is also home to the Visitor Center, Dry Tortugas national Park headquarters and camp sites. All visitors arriving by ferry or seaplane get down on Dry Tortugas National Park at Garden Key. Visitors need their own boat or vessel to visit Loggerhead key and Bush Key. All other keys are closed to public access.

What to do in Dry Tortugas National Park?

1. Tour historic Fort Jefferson and understand its structure and significance

Fort Jefferson is an incomplete, immense military fortification that was undertaken to secure the Dry Tortugas and the United States shipping passages in the Gulf of Mexico. Built from more than 16 million bricks, it is one of the largest US forts. The fort construction was left unfinished when Dry Tortugas was abandoned as a military base.

Today Fort Jefferson is a massive three-leveled hexagonal brick structure with a large parade ground and several interesting features. The ferry passengers are offered an hour long guided tour. It is an excellent opportunity to learn more about the 420 heavy guns, 37 powder magazines, 16 traverses, large cannons and casemates or gunrooms that once formed the defense system of the fort. Visitors also have the option of self-guided tours. 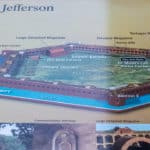 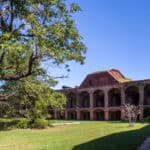 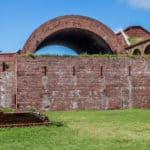 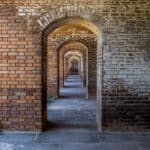 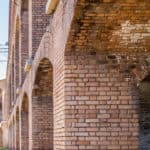 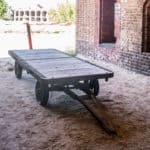 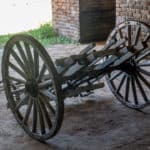 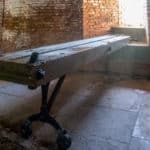 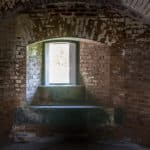 Six feet wide, 70 feet long moat was constructed on all sides on Fort Jefferson to act as a barrier and protect the fort from water-based invasions. The moat wall also serves as a breakwater and shields the fort structure from the rough waters of the Gulf. Visitors can go around the Fort by walking on the moat wall. The views from behind the fort are beautiful. By just peering down into the water we could see beautiful fishes swimming in the clear calm waters. Hiking the moat wall was definitely the highlight of our Dry Tortugas visit.

5. Bird watch sea birds and migrating land birds on the Great Florida Birding trail
The Dry Tortugas are home to many sea birds colonies including Sooty Terns and Brown Noddy Terns during nesting season. The islands are also frequented by land birds as they migrate between the US and South America and are a part of the Great Florida Birding Trail. Spring is the best time for bird watching.

Visiting the Dry Tortugas is an amazing experience and I highly recommend it for every visitor to the Florida Keys and Key West.

DOTTED GLOBE IS A PARTICIPANT IN THE AMAZON SERVICES LLC ASSOCIATES PROGRAM, AN AFFILIATE ADVERTISING PROGRAM DESIGNED TO PROVIDE A MEANS FOR US TO EARN FEES BY LINKING TO AMAZON.COM AND AFFILIATED SITES. DOTTED GLOBE ALSO PARTICIPATES IN OTHER AFFILIATE PROGRAMS AND MAY RECEIVE COMMISSIONS THROUGH PURCHASES MADE THROUGH EACH LINK.