I f you are looking for a destination that leaves you inspired, look no further than Jordan. Jordan is exemplary ancient architecture; Jordan is heart-warming culture; Jordan is a jaw-dropping adventure. If you have always wondered about the origin of Middle-Eastern political wars and wanted to know about peaceful life in the middle of conflict, travel to Jordan. After Israel, Jordan is the best place to understand the biblical history of the Holy Land, the struggle of the People of the Book (Jews, Christians, and Muslims) to call it their own, and the ensuing religious wars from the early Crusades to the continuing Iran-Israel conflict – all the while continuing to remain the safest tourist destination in the Middle-East.

Jordan is where time stands still – bedecked camels walk along highways and caravans carry goods and tourists across distances. Bedouin tents dot the red sand desert of Wadi Rum in the south while pink and yellow flowers bloom across the ruins of what used to be the flourishing bastions of the mighty Roman Empire. In the narrow Gulf of Aqaba, sunken tanks and ship wrecks lie undisturbed since decades and act as magnets for scuba divers while the impossibly sharp salt crystals of the Dead Sea continue to bedazzle and betray barefooted tourists.

Jordan’s biblical history is incredibly complex. Ruins of Roman temples lie under the remains of devastated churches over which imposing mosques were once built. Today it all lies in a state of disregard, religiously isolated and visited only by visitors and tourists. The ongoing wars might not even exist; every effort is to lull you against the conflict. All the road signs and nameplates lead only to Palestine and for all intents and purposes, Israel might not exist. But then you come across the Palestinians looking at their homeland with dewy eyes from the top of Umm Qais, the hundreds of refugees from Damascus and elsewhere in Syria, and the twinkling lights of Jerusalem across the Dead Sea and awaken to the transient nature of peace in this part of the world.

And in the midst of it all, lie the marvellous and majestic ruins of Petra. Petra is much more than a World Wonder or a bucket list item – it is an enchanted dip in the pages of history. Petra is a rock cut, immaculately carved world in itself – a place where you can gaze and applaud at the architectural audacity of the ancient Nabataean civilization and wonder about Bedouin’s hard life in the desert. In a nutshell, Petra is Jordan – withstanding and surviving the harsh desert weather, lustful eyes of ancient invaders, and damage done by the hands of irresponsible travelers – just as the democratic country continues to flourish and progress amidst religious conflicts, surrounding oil wars, and an influx of refugees.

Travel Resources to help you plan your trip to Jordan 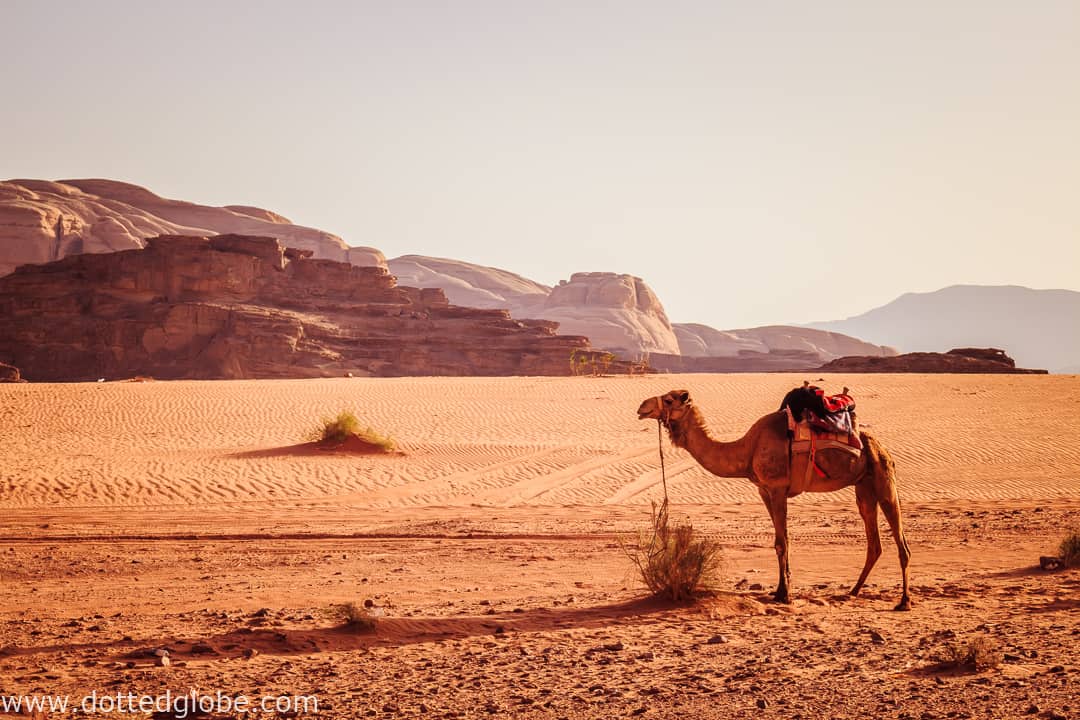 Desert camping in a Bedouin tent in Wadi Rum 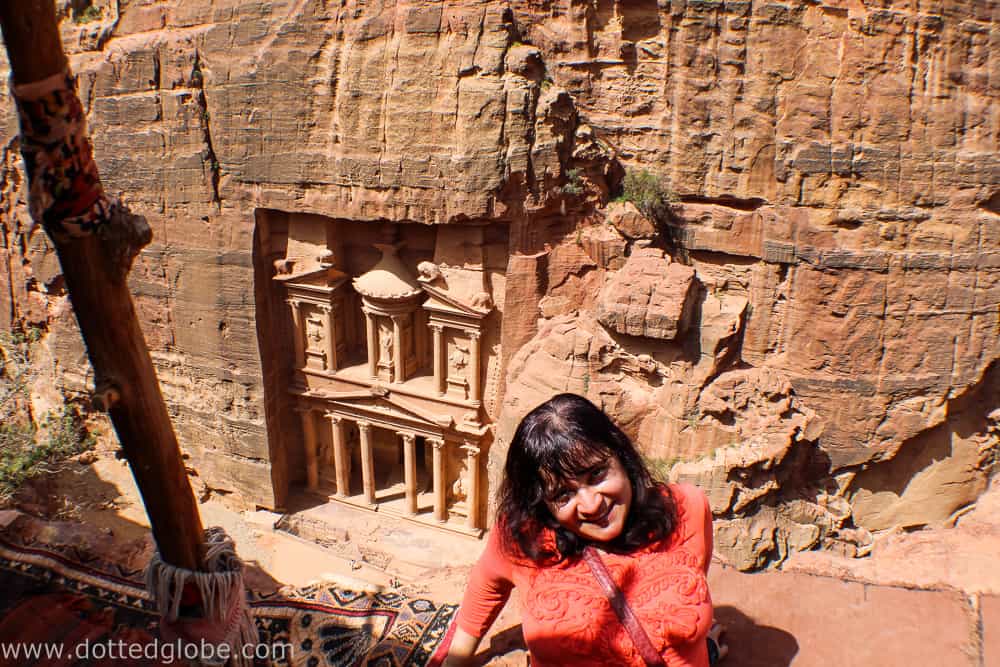 5 Best Ways to photograph the Treasury at Petra 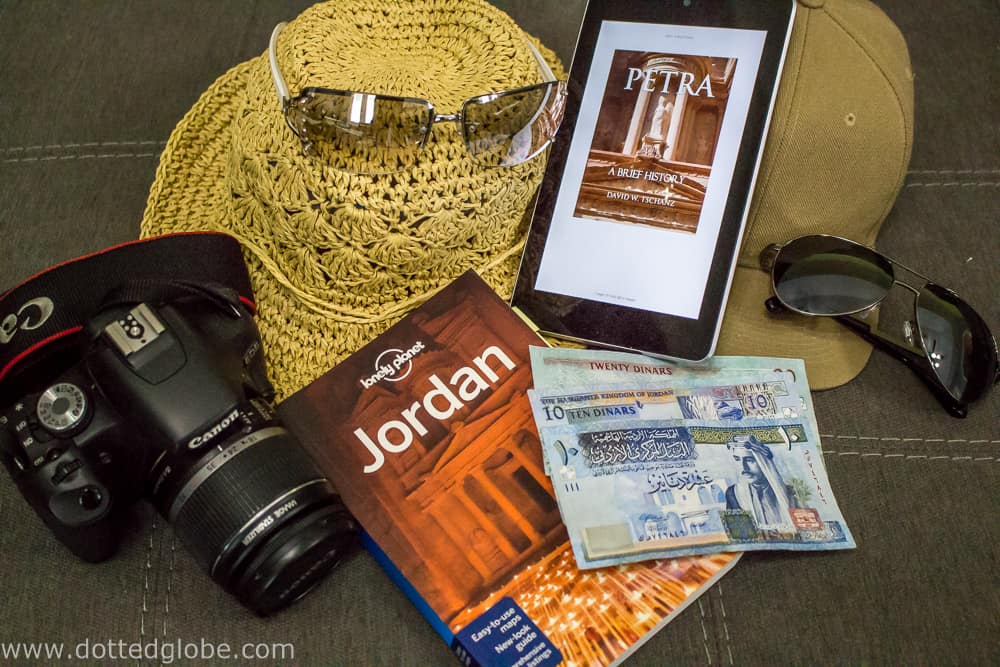 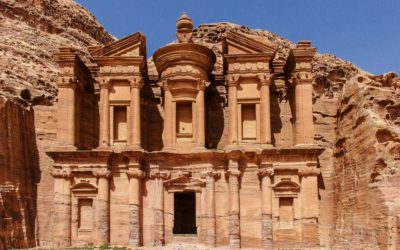 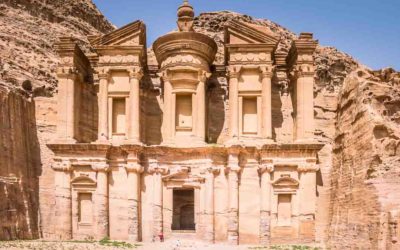 DOTTED GLOBE IS A PARTICIPANT IN THE AMAZON SERVICES LLC ASSOCIATES PROGRAM, AN AFFILIATE ADVERTISING PROGRAM DESIGNED TO PROVIDE A MEANS FOR US TO EARN FEES BY LINKING TO AMAZON.COM AND AFFILIATED SITES. DOTTED GLOBE ALSO PARTICIPATES IN OTHER AFFILIATE PROGRAMS AND MAY RECEIVE COMMISSIONS THROUGH PURCHASES MADE THROUGH EACH LINK.