Easter Island is a Chilean island in the middle of the Pacific Ocean.

The native Polynesian people called their island Rapa Nui while the Dutch explorer Jacob Roggeveen who explored the island on Easter Sunday in 1722 named it Easter Island.

Today the island is also called by its official Spanish name, Isla De Pascua. The small island has scant beaches, rocky coastline, and few trees. It is a UNESCO World Heritage Site and the dream destination of millions of tourists worldwide.

What makes Easter Island so special is the staggering 887 majestic Moai or stone statues found all over the island.

Some of them stand grandly over ancient ceremonial platforms while some lie toppled, broken and defeated at the very place they once guard.

More than a third can be found at their birthplace, in the quarry of Rano Raraku, in various stages of completion.

Easter Island, its statues, and its people have baffled generations and spawned various theories regarding their origin.

However, Easter Island also has many other archeological sites besides the Moai.

Here is a guide to the island’s most important archeological sites along with practical information on visiting and photographing them.

Tahai ceremonial complex on Easter Island is an archeological site with 3 Ahus or ceremonial platforms. This site was restored in 1974 by the American archeologist, Dr. William Mulloy.

The eyes on the Moai at Ahu Ko Te Riku are reconstructed replicas based on the partial remains of eyes discovered at Anakena beach. This Moai gives visitors an accurate idea of how the Ahus & Moais on Easter Island would have looked with carved eyes before their destruction.

Ahu Vai Ure originally had 6 Moai; the 6th Moai which could not be restored can be seen lying face down in front of the platform.

The Tahai complex also contains hare paenga or the boathouses, hare moa or chicken coops and recreates the ancient layout of Rapa Nui village at Tahai. An ancient restored boat ramp can be seen between Vai Ure and Tahai.

Additionally, Tahai ceremonial complex also contains the graves of William Mulloy and his wife, Emily Ross Mulloy. According to historical records, the Tahai Ceremonial Complex and surrounding area were one of the earliest ones to be populated on the island.

How to reach: By car, visitors can take the road that leads to the Museum, turn left at the Museum entrance and follow the unpaved road that leads to a basic parking lot. If you are walking from Hanga Roa follow the road along the coast, past the soccer field and the cemetery till the Ahus are visible. The 3 Ahus are really hard to miss and you can ask anybody for directions. The walk is about a mile long and takes 15-20 mins. While coming back from Tahai after sunset, stop at any of the restaurants along the road for dinner.

Photography Tips: Tahai is the most popular place to watch the sunset on Easter Island. The setting sun behind the silhouetted Moai creates some spectacular images. The sun sets exactly behind the Moai on equinoxes; at other times you will have to move to the right or left to capture perfect images.  However the Moai themselves are backlit in the evening and to take a clear picture of the Moai with restored eyes at Ko Te Riku, visitors need to visit this site in the morning as well. For more tips read the Ultimate Photography Guide to Easter Island.

Easter Island was formed about 2 million years ago by the eruption of 3 volcanoes: Rano Kau, Poike, and Terevaka. Rano Kau was the first volcano to erupt and is the largest volcanic crater on Easter Island. The crater has a freshwater lake and was at one time the only source of drinking water for the ancient Rapa Nui people.

The crater is more than one kilometer wide and about 200 meters deep and a stunning natural wonder. The crater rim overlooking the sea is eroded at a place called Kari Kari due to the action of the sea waves against the cliff base.

Ancient Rapa Nui ran down this fracture, climbed down the cliff and swam to the islet of Motu Nui as a part of the Birdman competition. The crater’s shape and deep sides protect vegetation from the strong winds and allow a different ecosystem to thrive inside the crater. At the viewpoint Mirador Rano Kau, a fenced in rock with several petroglyphs of Bird Man can be seen.

How to reach: By car or bikes, visitors can take the road past Mataveri Airport to Rano Kau. The road is well sign-posted and offers great views of the landing strip and Hanga Roa village along the way. If walking, the hike from Hanga Roa takes about an hour and the trail is clearly marked. From the crater viewpoint or Mirador Rano Kau, visitors can take the path to the left and walk around the crater to see it from different angles.

Photography Tips: Considering Rano Kau’s magnificent size a wide-angle lens is necessary to photograph the crater and the freshwater lake. The sides of the crater throw shadows over the lake and the vegetation and the area is best photographed on a sunny day in the morning or before noon.

In Rapa Nui language, Orongo means ‘The Call’. Ancient Rapa Nui people built the ceremonial village of Orongo on the rim of the Rano Kau crater on Easter Island and eventually, this village gained vast importance in the ritual of Tangata Manu or the Birdman competition and in the worship of Make-Make god.

Orongo offers sweeping views of the Rano Kau crater, the 3 islets or Motus off the coast and the more than 50 basalt houses that formed the Village of Orongo. The walls of the houses were decorated with red and white Rapa Nui paintings. The basalt stone slabs for the houses were sourced from inside the crater.

Two houses at the start of the trail are left in their original ruined condition while one house is left partially restored with an open roof so visitors can get a sense of the deterioration due to winds and vandals, the architecture and reconstruction efforts at Orongo.

The row of restored houses looks magnificent against the backdrop of the narrow cliff and the Pacific. The restored houses all have small entrances to offer protection from the wind and enemies.

The last house belonged to the priests who conducted the Birdman ceremonies and the rocks near this house were covered with petroglyphs denoting Birdmen, Make-Make God and Komaris or female vulva/fertility symbols.

Upwards of 1700 petroglyphs were discovered at this site. This area is now fenced in and inaccessible to visitors due to the fragility of the structures.

How to reach: By car or on foot, continue on the paved road past Mirador Rano Kau to reach the Visitor Center of Orongo. Entry to this site is limited to one visit per person and tickets are checked. The site closes at 6 pm.

Photography Tips: In my opinion, Orongo photographs best early-late afternoon when the sun is not harsh. The sweeping expanse of the houses at Orongo, the islets, and the deep blue sea make this a perfect place to take a wide-angle/panoramic shot.

Rano Raraku, located near the south-eastern coast, is the most well-known and photographed place on Easter Island.

No visitor to Easter Island can be left unmoved by the majestic sights at Rano Raraku. It was here that a majority of the Moai were carved and transported to various Ahus on the island.

Volcanic tuff found inside the quarry at Rano Raraku was softer and fragile than basalt and could be easily cut and shaped by the ancient Rapa Nui using basalt sculpting tools and implements.

When one looks at the slopes of Rano Raraku the Moai are everywhere. At first glance, just a few Moai can be distinguished, however, as the eyes get accustomed to the landscape the Moai are everywhere – buried neck deep, carved into nooks and crevices, and lying horizontally on the ground. It is a fascinating sight. Many of the Moai on the outer slopes of Rano Raraku are famous and known by their own names.

How to reach: Rano Raruku is one of the ticketed sites and requires an entry ticket to Rapa Nui National Park. Tickets are checked and entry is allowed only once per person. Rano Raraku is far outside Hanga Roa and a guided tour or car is the best way to reach this impressive archeological site.

From Hanga Roa, we took the road to Anakena Beach and turned left at the sign to Rano Raraku just before Ahu Tongariki. The slopes of the quarry will be visible before you even reach the fork. It is also possible to bike or rent a scooter to Rano Raraku.

Photography Tips: This is easily the place where you will be spending most of your time. I took more than a hundred pictures on the slopes of Rano Raraku. The whole area is a photographer’s paradise with the enigmatic Moai towering above the ground. It is virtually impossible to take a bad photo at Rano Raraku.

The key is arriving in the morning when the Moai’s faces and features are highlighted. If morning is not feasible, then Rano Raraku can also be seen just before sunset. Few of the classical images to capture at Rano Raraku are included below: 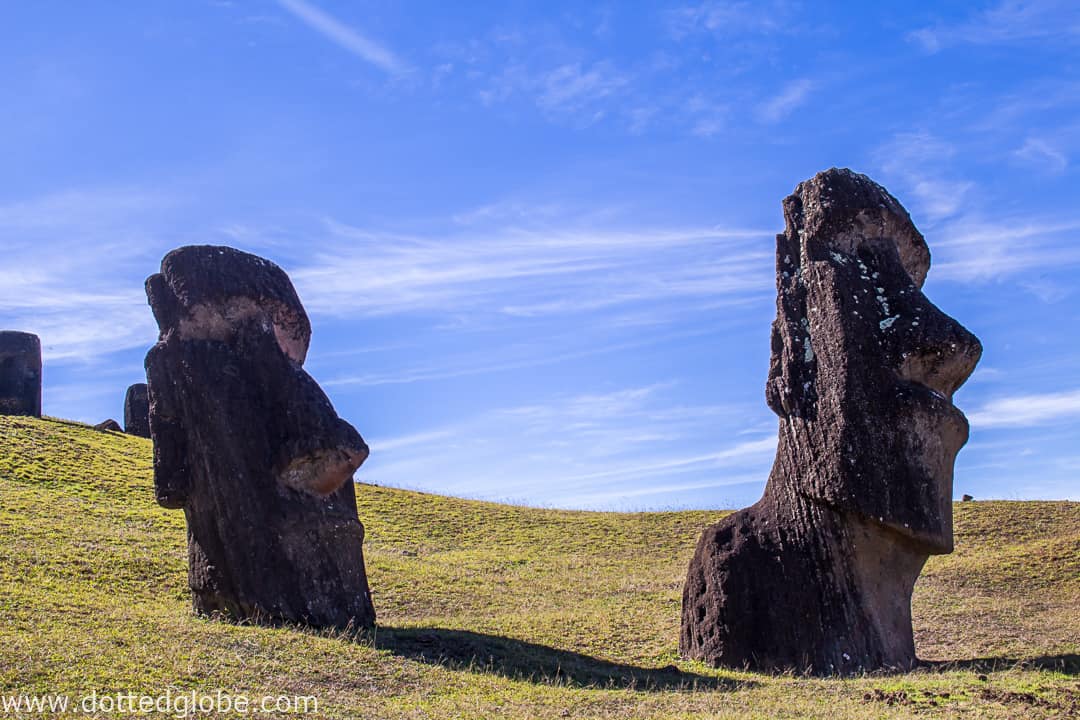 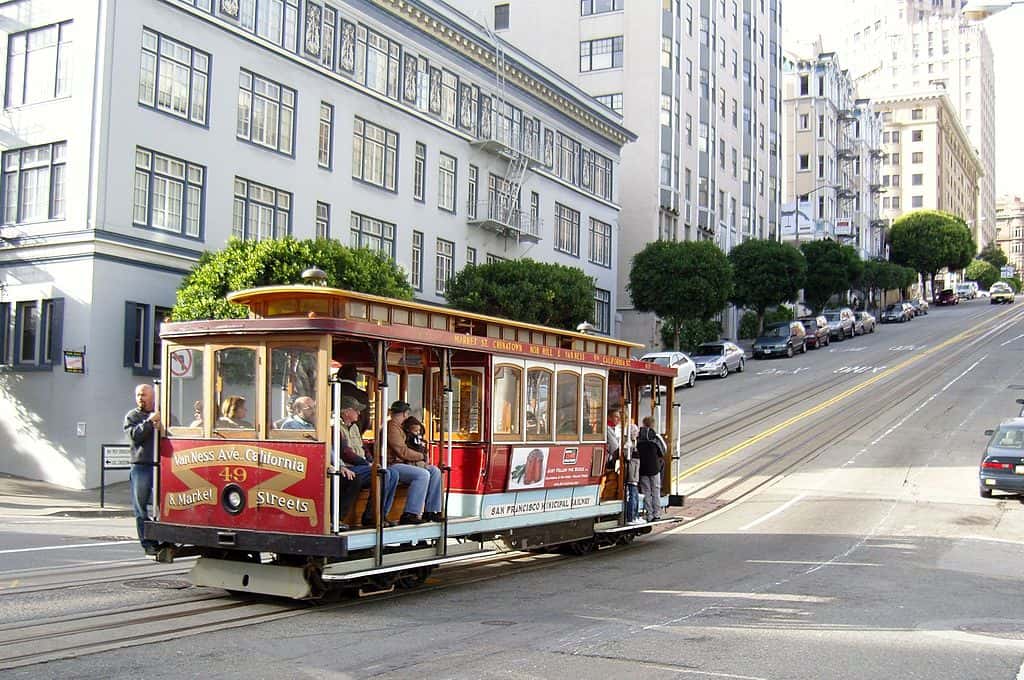 10 Days California Road Trip Itinerary: From the Pacific to the Redwoods!
Read Next Post →
Click here to cancel reply.

These are amazing photos. I am a beginner and would like to know what lenses you used? Thank you.