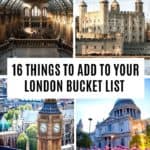 Are you planning to visit London, England? Check out our list of amazing things to do in London for first-time visitors including Big Ben, Buckingham Palace, and other popular attractions. Read recommendations on what to see, where to eat, and more in this London travel guide.

Red telephone boxes, double-decker buses, and Big Ben! Some things just scream London. My fascination with all things London began with some of the best books set in London: Oliver Twist, Great Expectations, and The Adventures of Sherlock Holmes. London has inspired everyone from authors and poets to cricketers and scientists.

London is one of the top international travel destinations and visited annually by over 15 million visitors. London has everything from cultural attractions, rich history, top-notch restaurants, shopping, entertainment, and more. It is a mecca for literary lovers. There is so much to do and see in London that it is really hard to plan your visit, especially if you have less time. Here are the best things to do in London that you must see on your first visit.

Dotted Globe contains affiliate links. If you click one of them, we may receive a small commission at no extra cost to you. Read my full Disclosure here. Thank you!

Best Things to do in London on your first visit

Begin your first visit to the city by checking out the most popular tourist attractions in Central London (London City Center). The area surrounding the Palace of Westminster is home to Big Ben, the Houses of Parliament, Westminster Abbey, Buckingham Palace, etc. Other things to see include Westminster Bridge and the iconic views of the tower, palace, bridge, and the river. To reach Westminster, take the tube to the Westminster Tube station.

Big Ben is London’s famous clock tower. It is located on the Parliament building or the Palace of Westminster. The tower is now renamed Elizabeth Tower in the Queen’s honor and is over 96 meters tall. The clock tower has a massive bell, weighing over 15 tonnes. The tower is currently undergoing renovation and you might come across some scaffolding. Big Ben looks amazing at night when the clock faces are lit up.

The Houses of Parliament

Visitors can tour the UK Parliament Houses, one of the oldest government assemblies, and see the famous House of Commons and House of Lords. The houses are located inside the Palace of Westminster. The tours are just over an hour long and held on Saturdays throughout the year and from Monday to Friday in summer, when the Parliament is not in session. You will be able to see the houses from inside as well as Westminster Hall.

Westminster Abbey is London’s famous church founded by Edward the Confessor. It is over 1000 years old and the site of royal weddings and coronations. You can tour Westminster Abbey from Monday to Saturday and see the historic building from the inside.

Buckingham Palace & the Changing of the Guard

Buckingham Palace is one of London’s most iconic buildings and a must-visit when in the city. The palace is Britain’s royal family’s London residence and if you are lucky, you might even see the Queen and other members of the royal family on the central balcony. One of the most popular ceremonies at the Palace is the Changing of the Guard Ceremony. It happens every day at 11:30 am and draws many visitors. You can watch the military band march during the ceremony. During summer, the State Apartments of the palace are open for ticketed tours.

The Tower of London and Tower Bridge

After Buckingham Palace and Big Ben, the Tower of London is the city’s most visited attraction. The Tower of London is actually a castle and has been utilized for several different purposes at various times in English history. This UNESCO World Heritage Site is located on the northern banks on the River Thames. The iconic White Tower is what gives the castle its name and today it serves as a museum.

On a visit to the Tower of London, you can see the world-famous Crown Jewels. The staggering gemstone collection is truly magnificent and one of the best things to do in London. Other things to do at the Tower of London include the touring the prison with the Yeomen Warders, understanding the gruesome history of the Bloody Tower, exploring the famous White Tower and it’s royal armor collection, seeing the exhibits at the Royal Mint, and touring the Medieval Palace rooms. We recommend spending at least 3 to 4 hours to see everything including in the admission price.

While you are at the Tower of London, check out the adjacent Tower Bridge which spans the River Thames. This iconic bridge is one of London’s most famous landmarks and recognized by visitors the world over. By buying tickets to the Tower Bridge Experience, you can walk across the bridge using the closed walkway as well as see exhibits on the bridge’s history and architecture. From the Tower Bridge, you can also see the London Bridge.

St. James Park is located adjacent to Westminster’s most important buildings including Big Ben, the Houses of Parliament, Buckingham Palace, Churchill’s War Rooms, etc. It makes for a great stop between the historic tours; we especially recommend it for families with kids. The park looks magical spring through fall but is also nice in winter. The park has iconic views of the London Eye and the surrounding buildings. The park has a lake and you can spot swans, pelicans, ducks, geese, pigeons, rabbits, and hedgehogs. Take in the view from the bridge over the lake or have a picnic under the trees.

After relaxing in the park, head over to see Churchill War Rooms. You get to walk through underground war rooms where people actually worked and lived, a thrilling experience. The War Rooms have lots of information on Winston Churchill from his birth to becoming Prime Minister and through World War II. The rooms are kept exactly as they were during the war – map rooms, switchboards, etc – and offer great insight on war operations and the assault against Germany. Seeing the Churchill War Rooms is a must for military aficionados. We recommend keeping aside 2 to 3 hours to see everything.

The British Museum is an absolute must-visit for archeology and history lovers. The museum collection has over 8 million artifacts and artworks and is the largest of its kind. It would easily take 3 to 4 days to explore the vast collection in its entirety – we would recommend selecting a few galleries based on your interest and exploring their exhibits while keeping the rest for a future visit.

The Egyptian, Assyrian, and Mesopotamian galleries are really interesting. Must-see exhibits include the Rosetta Stone which was key in deciphering the Egyptian hieroglyphics, the Parthenon Marbles sculpture from Ancient Greece, ancient Egyptian mummies, the Standard of Ur from Mesopotamian Iraq, among others. The museum also has a vast collection of Renaissance, Medieval, Greek, and Roman artifacts including jewels, sculptures, mosaics and more.

St. Paul is the most popular church in London and is said to be the most beautiful cathedral in England. The cathedral building is magnificent and awe-inspiring. If you have time to see only one church in London, pick St Paul’s over Westminster Abbey. We recommend taking a guided tour of the cathedral to see the art collections, walk down into the crypts, and getting more information on details like the vaulted ceiling. Climb to the observation deck on top of the dome to see beautiful views of London from above – the deck has over 500 steps and takes about 15 minutes to climb, for those with average physical fitness.

Trafalgar Square is one of the most famous public squares in the world. Must see in the square is Nelson’s Column, an iconic memorial built in the memory of Admiral Nelson, who defeated Napoleon at the Battle of Trafalgar in 1805. Also worth seeing in Trafalgar Square are Admiralty Arch, the National Gallery, and Canada House. Trafalgar Square is an amazing place to people-watch in London. In the holiday season, Trafalgar Square is even more spectacular due to holiday lights and the huge Christmas Tree.

The iconic red public telephone box is a must-visit when in London. You will see these boxes standing at many street corners. The telephone boxes were designed and installed to commemorate the Silver Jubilee of King George V and have since then become synonymous with London. Some of these have even been repurposed into mini-libraries and art kiosks. There is one just outside the Westminster Tube station if you want to pop in for a picture!

London’s Tate Museums are actually two museums – Tate Britain and Tate Modern. The two sites are actually located on opposite banks of the Thames but connected by a high-speed ferry, making them convenient to see in one visit. Also, both of them are also free to visit, making them one of the top free things to do in London.

The two museums differ in their collection: Tate Britain features tradition artwork, primarily of British origin, from the early 1500s through the present. Architecturally, Tate Britain is very interesting and photogenic as well as has lots of famous exhibits.

If you love modern art, you should head over to Tate Modern: it has over millions of pieces of contemporary art by artists all over the world. at Tate Modern, you will find sculptures, digital art, and artwork in non-traditional media. Also, Tate Modern is located directly on the riverbank and has exceptional views of London.

No list of things to do in London can be complete without mentioning the London Eye. The London Eye is the famous Ferris wheel located on the South Bank of the River Thames. The views from the top are simply stunning. One rotation of the London Eye takes about 30 minutes, giving you sufficient time to take in views of London from above. Also, walk around your pod to see views from different angles. You need to buy tickets online to save time – there can be a queue of half an hour to buy tickets at the pier.

Cruise down the Thames

To experience London in a unique way, consider a boat cruise down the River Thames. Different types of river cruises are available including dinner or speedboat cruise. To save money, we would recommend the basic cruise. On all tours, the tour guides give a great overview of London’s historic monuments. During the cruise, you can take great photos of London from the water. It can get quite chilly on the water, so bring along a warm jacket or coat or sweater.

Besides these attractions, London has many other things to do if you have more time. Some of the popular ones include seeing the exhibits at the Natural History Museum, taking a stroll in Hyde Park, seeing a show at West End, shopping at Covent Garden, and indulging in the afternoon tea at the Ritz. If you love books, then you can visit Baker Street or tour the Harry Potter filming locales. If you want to escape the city, then there are also many incredible day trips from London that will take you to beaches, castles, and historic sights. Whatever you choose to do, you are guaranteed a great time on your first visit to London.

Did we cover all of London’s most popular attractions? Did we miss out on your favorite one? Let us know through comments!