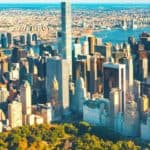 Are you looking for the best things to do in New York City in fall? Along with the usual attractions such as the 9/11 Memorial & Museum, Times Square, the MET, and Wall Street, New York also has lots of seasonal fall-themed events and things to do. Explore NYC’s finest fall attractions including leaf-peeping in Central Park, the Village Halloween Parade, Macy’s Thanksgiving Parade, fall colors in Brooklyn Botanic Garden, and more in this epic guide. You may also love our post on 17 Best National Parks in the USA to see the fall colors.

I have wanted to see New York in fall ever since I saw it on Sex and the City. Carrie Bradshaw running down the steps of her famous apartment while maple leaves blew around her, the girls walking over the Brooklyn Bridge in the trendiest of fall coats, and of course the boathouse in Central Park! And then I fell in love with autumn-hued NYC all over again in Gossip Girl.

When I finally made my first trip there – Big Apple in fall is as gorgeous as it’s made out to be. The air is crisp, literally, every other bakery has bits of cinnamon wafting in the air, and Halloween happenings are everywhere. Central Park looks absolutely delightful – and as always makes me want to move to New York City. NYC in fall is truly one of the best times to visit because you can skip both the summer as well as winter crowds.

Dotted Globe contains affiliate links. If you click one of them, we may receive a small commission at no extra cost to you. Read my full Disclosure here. Thank you!

Best Things to do in New York City in the fall

In this post, I discuss the fall-themed attractions in New York. If you are visiting the city for the first time, you should also read my post on 37 Best Things to do in New York for first time visitors.

Here are some of my favorite things to do in New York in the fall – while I have done many of them, some others like the Thanksgiving parade are on my NYC fall bucket list.

Take a romantic stroll in Central Park in the fall

Central Park looks stunning in fall. For awesome photo ops, try framing one of Central Park’s bridges amidst the surrounding fall colors. My personal favorites are the iconic Bow Bridge across the lake and the charming Gapstow Bridge. To see the fall colors from the water, consider renting a boat. And while you are there, don’t forget to photograph the skyline with the fall foliage. Also, the elms surrounding the Mall (pedestrian pathway) turn orange and look beautiful. For a great date, go for a romantic carriage ride through Central Park.

While this comes towards the end of the season, Macy’s Thanksgiving parade in New York is one of the most-watched events in the world. Seeing the parade live is way more fun than watching it on TV. The parade is about 3 hours long and held in Manhattan. The parade is known for its giant inflated balloons, intricate floats, marching bands, and live performances. Kids especially love the fun-filled parade. If you are planning a trip to New York to see the parade, then book your hotel early.

Have a beer at Oktoberfest

NYC does Oktoberfest on a big, big scale. While no match to Germany, New York does have its own Munich on the East River event. There is also a large event in Central Park while smaller celebrations take place all over the city. You will find people wearing lederhosen and can eat delicious bratwursts, pretzels, and other Bavarian food. And of course, there is great beer and lots of music and dancing. All in all, a grand time!

Participate in the Village Halloween Parade

As far as Halloween parades go, nothing is more spooky or fun than New Village Halloween Parade. The parade has everything from a dedicated theme, costumed partygoers, bands, dancers, puppets, and more. Anymore wearing a costume can join in the parade. There’s also an after-party after the parade which is one of the best ways to wind up Halloween night. For more details about the parade, check here.

October is the Pumpkin month and almost all eateries in New York are ready to welcome fall by bringing back pumpkins in all shapes and forms. Along with pumpkin, you will also find apple, cinnamon, squash, and other harvest-themed foods. NYC is the world’s best city for foodies and the fall treats on Big Apple are pretty epic. Try pumpkin doughnuts, pumpkin pancakes, pumpkin cheesecake, pumpkin milkshake, and pumpkin latte! You will also find savory items such as pumpkin dumplings, pumpkin ravioli, and pumpkin tacos. For a great list of fall NYC treats, check here.

If you believe all the legends that abound in NYC about ghosts, vampires, goblins, and witches then you would think of NYC as the world’s most haunted city. Thankfully, the paranormal activity is not visible during the daytime but you can explore some of the creepiest and scariest sights in New York at night for a memorable experience. The beautiful St. Paul’s Chapel is said to be haunted by a headless ghost while the Hotel Chelsea is said to be the spot for numerous scary stories including one associated with the Titanic. Even the Empire State Building is rumored to be haunted by all the people who committed suicide by jumping from it. To create your own DIY ghost tour, check this guide.

Skate at the rink in Rockefeller

You would think that the ice rinks start in winter – but no! The most popular rink at Rockefeller center opens around the 2nd week of October while the Wollman rink at Central Park opens in late October. You can rent ice skates at both the rinks and indulge in this age-old New York tradition. Ice skating at the rink followed by hot chocolate or cider makes for a great date night while kids love to learn skating and celebrate the cold weather. To read other winter attractions in the city, read our post on Things to do in New York in the winter.

If you are a coffee connoisseur, then you must time your NYC fall visit with the New York Coffee Festival. The event is usually held around the second week of October and is one of the largest festivals of its kind. You can sample different coffees, lattes, and expressos. Also available are coffee treats and cocktails.

Watch the fall foliage from the Empire State Building

New York has many small parks and green spaces within Manhattan and they all sport stunning fall foliage. The best place to see these fall colors within the city is from the top of the Empire State Building. New York’s other famous observation platforms include the Top of the Rock and One World Observatory – both of these would also have panoramic views over the city and Central Park.

Marvel at the lanterns at Jack O’Lantern Blaze

In case you didn’t know, the Jack O’Lantern Blaze is Tri-state area’s most awesome fall festival. Held in Hudson Valley, the ticketed event has thousands (over 7000 to be precise) of elaborately carved pumpkins placed all over the grounds of the Van Cortlandt Manor. Along with the pumpkins, you will also find ghosts, autumn treats, Halloween music, and other extraordinary pumpkin artwork. Keep aside an hour or two to fully experience the attractions. Know more about the event here.

New York’s high-end shopping streets are legendary. The most famous of them are Broadway and 5th Avenue. On Fifth Avenue, you will find the Apple store, Tiffany & Co., Gucci, and Prada among others while Broadway is home to Bloomingdales. All of these stores have amazing fall displays and feature the latest fall fashion trends and styles and are as cool as the Holiday window displays in December. If you visit towards the end of the season, you will also be able to see the holiday window displays as most stores including Macy’s unveil them in early November. Here’s a guide to best Christmas displays.

The New York Fashion Week (NYFW) is among the top watched fashion shows in the world along with London, Paris, and Milan. Here’s a fun fact for those new to fashion weeks: the September NYFW does not showcase fall fashion but upcoming spring and summer fashion. While some shows are industry only, many others are open to the public. Apart from the show, you will also see designer shopping events pop up stores, hair salon deals, etc.

Have fun at the Atlantic Antic Street Festival

The Atlantic Antic is an annual fall fair/street festival held on Atlantic Avenue in Brooklyn during September end. This is one of the largest street festivals and features tons of food & beverage, as well as arts & crafts, stands along with live entertainment. The event also lots of kid-friendly attractions including face painting, balloon animals, etc.

While most people know of the fall colors in Central Park, few visit Brooklyn Botanic Garden to see the leaves turn color. Many trees including sumacs, maples, dogwoods, and oaks have brilliant foliage from fiery red to golden yellow and every color in between. One of the best places to take photos of the fall foliage is by the Japanese garden. The Rose garden is also in bloom with fall roses and smells heavenly.

Bike across the Brooklyn Bridge

A favorite NYC activity! While biking the Brooklyn Bridge is always fun it gets so much better in the fall. The cool air doesn’t tire you out easily and you can explore much more of Brooklyn that you would on foot. Many bike shops have rentals or you can just grab a Citi Bike and ride across. While in Brooklyn, don’t forget to explore the area’s trendiest neighborhood, DUMBO – famous for its art galleries and boutique shops.

Drink a sunset cocktail on a rooftop bar

New York has many rooftop bars and these are perfect to have an evening drink and watch the sun go down – while simultaneously enjoying the fall weather. Some bars even go all out and deck their roofs with fall leaves while others add hot cider and pumpkin-flavored brews for the season. Some of the must NYC rooftop bars to visit in fall include the Leaf Bar and Lounge for couples while families can go to the kid-friendly Serra Birreria at Eataly Flatiron.

Did you like our post on favorite things to do in New York City in the fall? If you are planning a fall visit to the city, then do visit these attractions and send us gorgeous pictures of the fall foliage in New York.