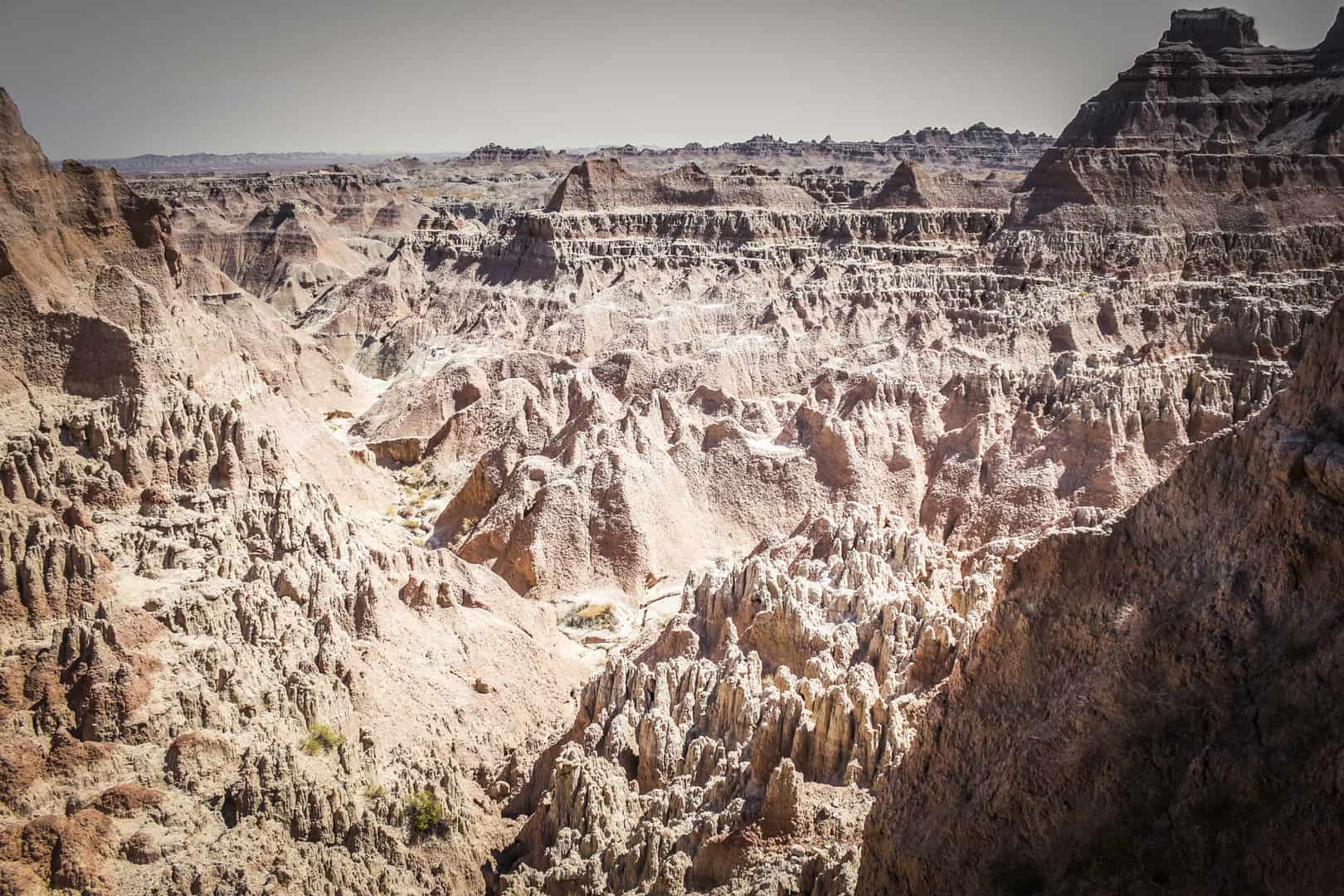 In my recent post on Badlands, I mentioned how much I loved Badlands more than the Grand Canyon and I could hear the protesting voices loud, clear, and far.

Don’t get me wrong, the Grand Canyon is incredibly beautiful in its own way – so much that we have visited it thrice to date – but Badlands is breathtaking in a more surreal way.

I have finally undertaken this post to explain what I mean when I say that visiting Badlands provides a far richer experience than a trip to see the Grand Canyon.

To put it simply, we fell in love with the Grand Canyon but we will always love the Badlands.

Badlands Versus The Grand Canyon: Which One Should You Visit?

One of the major reasons that we did not like the Grand Canyon National Park as much is that it seems to be almost always crowded.

When most people talk of visiting the US National Parks they begin with the triad of Yellowstone, Yosemite, and the Grand Canyon.

The Grand Canyon is always visited by tourists, even on stormy and snowy days.

Over 6 million people visited the Grand Canyon last year compared to just over 1 million that visited the Badlands.

By a simple comparison of the numbers, Badlands provides a much more intimate nature and wildlife experience.

Badlands is a must-stop on a South Dakota road trip.

The first thing that struck me about Grand Canyon National Park was the blatant commercialization.

Even before we reached, billboards touting a variety of Grand Canyon tours and hotels to stay in the area distracted our attention from the nearby scenery.

Every rest stop and gas station we stopped on the way had over a dozen leaflets on specialized tours to get the best of Grand Canyon.

President Theodore Roosevelt, while declaring the Grand Canyon a national monument, said “Leave it as it is. You cannot improve on it. The ages have been at work on it, and man can only mar it.”

And yet, projects for further commercialization of the Grand Canyon continue to be proposed even today.

Contrast that with Badlands, where the only billboards on the isolated stretches of I-90 advertise the ‘Wall Drug’, a somewhat kitschy but interesting tourist mall.

Apart from that, there are no developments, no tours, and no shuttles to experience the Badlands.

Your ‘tour bus’ is your car and the only tour guides you are likely to encounter inside the park include bison and bighorn sheep.

The National Parks were created for the very purpose of protecting the natural landscape, wildlife, flora and fauna, dark skies, and experiencing nature at its purest.

Today, in Grand Canyon Natural Park that experience is elusive to a few who venture beyond its scenic rim drives and rim trails to descend into the inner canyon itself.

Badlands on the other hand offers unobstructed views of its beauty even before you venture on the Badlands Loop Road, one of the most scenic drives in South Dakota.

Most of the overlooks on the Loop Road are accessible and have expansive views of the White River Valley.

The ancient landscape of the Badlands remains mostly pure and untouched in a majority of places, just as nature intended it to be.

There are many adjectives to describe the Grand Canyon but unearthly is not one of them.

The Grand Canyon is a sheer force of nature on such a spectacular scale that it can only be called majestic and beautiful.

The Badlands, on the other hand, have been called alien, unearthly, mysterious, barren, eerie, otherworldly, enchanting, and enigmatic at different times by different people.

The Badlands are beautiful in a peculiar and haunting manner and have been the source of inspiration for artists, creators, sculptors, and photographers – basically anyone who has been able to sense their wildness.

This untamed character magnifies the attraction of the Badlands and draws the adventurous visitor like a moth to a flame.

Reaching the Grand Canyon is easy.

Hop on a flight to Vegas – with cheap airfare deals, it is nowadays easily affordable for most – and go to see the Grand Canyon.

No rental car? No problem! Get a tour bus or a private limo if you are that fussy.

See the West Rim in a day and return.

The vast commercialization that I touched upon earlier has also made the Grand Canyon lose its remoteness.

We think that the only perfect way to see the Grand Canyon is as a part of a multi-day road trip to either the South Rim or the North Rim.

However, even that is slowly losing its charm with the sheer number of people attempting the same trip.

Whereas for the Badlands, most people’s initial reaction would be ‘where on earth is that’.

Firmly located in the flyover country of central South Dakota, the most accessible way to reach the Badlands is by flying into Rapid City.

Now go, look that up on the map.

When you get down from your small plane at the Rapid City airport, rent a car and drive an hour to the Badlands.

You are likely to pass less than fifty cars on your way unless you travel on long weekends.

Badlands National Park is truly remote, in fact, it is one of the most remote national parks in the country.

The remoteness of the Badlands is an exciting factor for most visitors.

You want to visit and explore the Grand Canyon? How would you like to do it?

If good old hiking or a scenic drive or bus tour isn’t enough, you can take a Jeep tour or a mule ride to the bottom of the canyon or stand on a glass-bottom skywalk or purchase a splurge-worthy private plane tour or take a helicopter tour complete with limo pickup and champagne lunch.

And then off course, there is the train that takes you straight to the canyon rim!

The options that exist to view the Grand Canyon are completely worthy of this UNESCO World Heritage Site.

On the other hand, Badlands has retained its primal beauty at the cost of primitive infrastructure.

The only ways to explore Badlands include driving, camping, and hiking – that too is limited to the North unit.

The South Unit of Badlands has no paved roads or marked trails; visitors are left to explore the rugged landscape solely on their own.

Phoenix, Sedona, the glitzy world of Las Vegas, and the natural attractions of Antelope Canyon, Havasupai Falls, Horseshoe Bend, Zion National Park, and Bryce Canyon National Park are located quite near to the Grand Canyon.

Other attractions like Canyonlands National Park, Arches National Park, Monument Valley, Death Valley National Park, and Los Angeles are located less than a day’s drive from the Grand Canyon leading to a spectacular week-long road trip in the area.

Badlands also has many nearby attractions including Mount Rushmore National Memorial, Crazy Horse Memorial, and Custer State Park which make for an epic South Dakota Road Trip, however, they are not as popular as the attractions surrounding the Grand Canyon.

Also Read: Ultimate South Dakota Road Trip Itinerary: When to Go and What to See

Now I don’t know about you, but I immediately think of dinosaurs when someone says prehistoric!

While the Grand Canyon rocks are more ancient than the dinosaurs, the process of canyon formation didn’t begin that early and so there are no dinosaur bones in the Grand Canyon.

The same is the case of Badlands.

However both the parks contain a variety of fossils including marine fossils, sea mammals, and other prehistoric animals that roamed in the area.

Now if only we had dinosaur fossils in any one park there would be a clear winner but as the case rests, this one is a tie!

Now if you really wanted to see dinosaur fossils and even a dinosaur museum, then consider visiting Theodore Roosevelt national park in North Dakota!!

If we are comparing the Grand Canyon and Badlands both as nature made them; then it is a very difficult task.

Both are incredibly beautiful in a hundred different ways.

The Grand Canyon is a truly enormous work of nature; the area of the National Park is about 1900 square miles.

The canyon itself is more than a mile deep and the eroded sides of the canyon are unparalleled in their ruggedness.

The Badlands, meanwhile, are spread just over 380 square miles but what they cannot make up for in grandiosity they make up for in their bizarre formations and surreal beauty.

Visiting the Grand Canyon is a memorable experience while the Badlands are simply unforgettable.

Both the Grand Canyon and the Badlands are the work of a million years of erosion and deposition.

The Colorado River and its waters started continuously cutting the Colorado Plateau to form the Grand Canyon a million years ago.

In the Northern Great Plains, the White River continuously eroded the prairies to reveal a million-year-old dramatic landscape.

Volcanic activity played a role in the deposition and metamorphosis of different layers in both cases.

This erosion activity continues even today and the Grand Canyon and Badlands both continue to be shaped by the flowing water.

They contain a variety of geological landforms and provide information about the process.

Both the National Parks are unique in their own ways; the Grand Canyon is the world’s most majestic canyon while the Badlands of South Dakota are more remote and unearthly than any other badlands on earth.

The Badlands and Grand Canyon both are teeming with wildlife and offer plenty of wildlife viewing opportunities for visitors who venture into these great national parks.

However, if truth be told we have seen way more animals in Badlands than we have in the Grand Canyon!

Much of the area outside of Grand Canyon National Park but surrounding it belongs to 6 Native American tribes, the largest reservation among them known as the Navajo Nation.

The Badlands National Park South Unit is administered in conjunction with the Lakota Indians and stories of the legendary Sioux warriors including Crazy Horse abound in the area.

Both the national parks have sacred sites that have been worshipped since ages by the Native Americans.

Visiting the national parks is a great way to learn more about the Native American way of life, their culture, and their rich heritage.

What do you think? Which national park do you love more and which are you going to visit next?