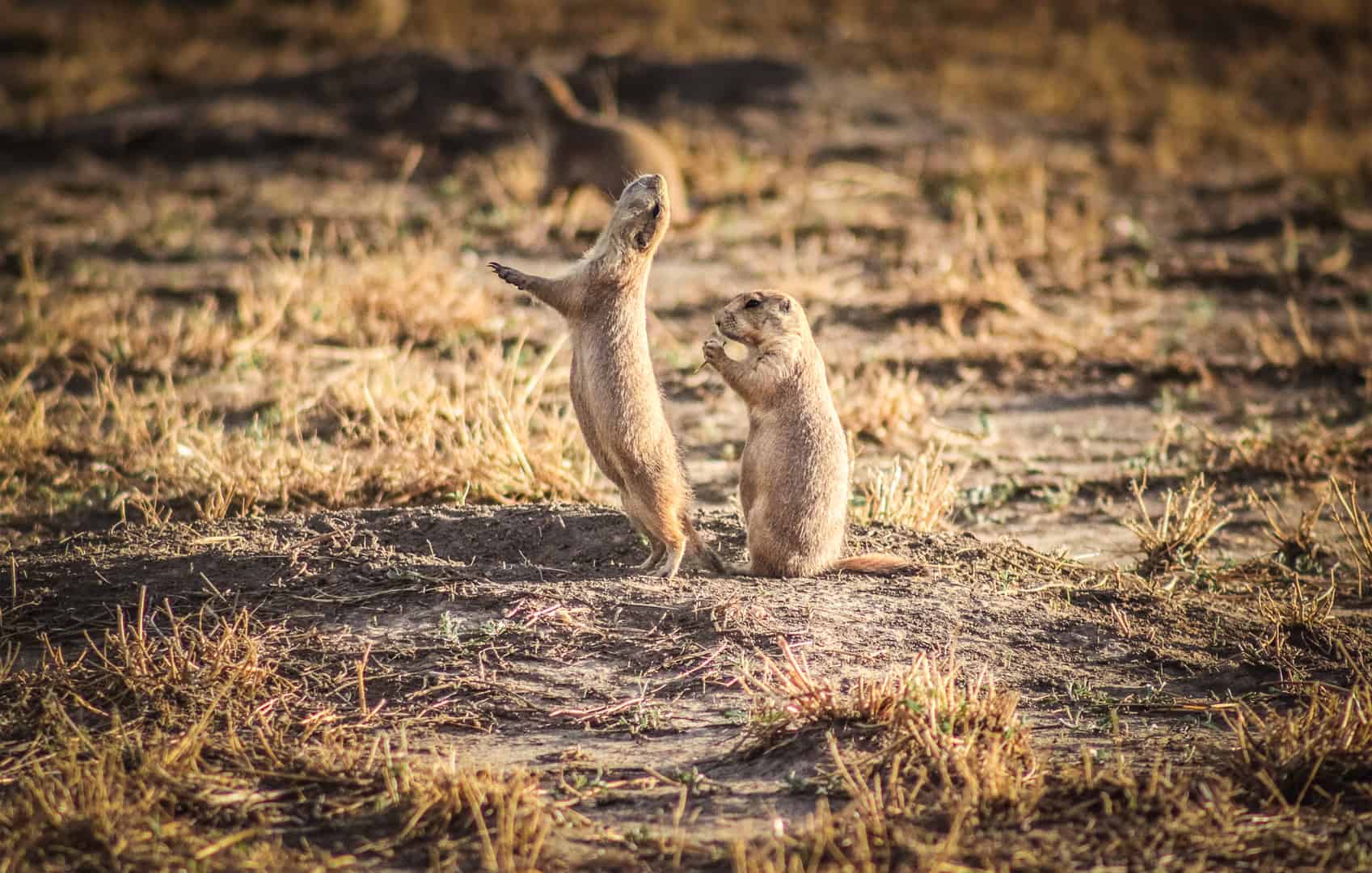 South Dakota is home to abundant wildlife of the northern Great Plains.

On a South Dakota Road Trip, you are sure to experience a variety of wildlife encounters including begging burros peeking through your car window, buffalo herd blocking your way, deer jumping unexpectedly on the road, mountain goats peeking at your from the top of canyons, and pheasants walking alongside on hiking trails.

After the dramatic scenery of Badlands, the unexpected wildlife encounters were my favorite part of our road trip.

Where To See Wildlife In South Dakota

Much of the wildlife is concentrated around the Black Hills and western South Dakota, along with the many national parks, monuments, and state parks.

Here are our favorite wildlife viewing areas in the wild:

While the entire area of Custer State Park is known for its rich wildlife, to experience the most wildlife encounters in a limited time, we recommend driving along the Wildlife Scenic Look at dawn or dusk.

You will find a variety of animals including Custer’s famous bison, deer, mountain goats, and sheep.

Also Read: 15 Best Things to do in Custer State Park for Families

The Badlands Loop Road allowed us to see a variety of animals including pronghorns, coyotes, squirrels, and prairie dogs.

Hiking in Badlands allowed us to visit unfrequented areas and see more wildlife including eagles, elks, and baby bison.

Sage Creek Wilderness Area in Badlands is also rich in wildlife and provides great viewing experiences for those who chose to backpack here.

While the sanctuary has the ever-present mountain goats and deer, this is the best place to see the wild horses of South Dakota.

Almost 600 horses roam free in the large sanctuary and it is great fun to see them riding along the hills and prairies.

The pronghorn antelopes are especially abundant in the park along with bison, prairie dogs, and elks.

President Theodore Roosevelt wrote profusely about the Northern Great Plains Wildlife in his books Hunting Trips of a Ranchman and The Wilderness Hunter and what better way to get introduced to the animals than with quotes by the former President.

“…lands, where the ground is roughest, and where there is some cover, even though scattered and scanty, are the best places to find the black-tail [mule deer].” – Roosevelt

The Mule Deer were larger than the white-tailed deer and we saw just a few driving on the Wildlife Loop Road in Custer State Park.

The deer are named so because their ears resemble those of a mule.

Black-tailed deer is a sub-species that is native to the Great Plains.

We started seeing them right from the time we left the I-90 and saw them inside Badlands, Custer, on the Peter Norbeck Scenic Byway and while visiting the Mount Rushmore National Memorial.

We had to be on the lookout for leaping deer suddenly crossing the roads and we saw them climbing the Badlands geological formations.

After seeing a lot of deer, we were on the lookout of some elk in Custer State Park.

The beautiful animals with elaborate horns did not disappoint and we even saw a few running gracefully on Custer’s rolling hills.

Pronghorn are the fastest animals in North America.

The best places to spot the pronghorns are in Badlands and Custer State Park.

The pronghorns are similar to antelopes with graceful bodies and short horns.

Bighorn Sheep are native to the Black Hills of South Dakota.

We saw some of the sheep in Badlands while hiking some of the trails and on the Custer Wildlife Loop Road.

Their rough hoofs enable the bighorn sheep to climb mountains and rocky terrain.

We found the mountain goat to be as prolific as the white-tailed deer; they were everywhere from Mount Rushmore, Crazy Horse, Iron Mountain Road, Badlands to Custer State Park.

They were exceptionally adept at climbing over various Badlands formations and we even observed the progress of a herd as it climbed buttes, spires, and reached the Wildlife Loop Road.

“Prairie-dogs are abundant…; they are in shape like little woodchucks, and are the most noisy and inquisitive animals imaginable. They are never found singly, but always in towns of several hundred inhabitants; and these towns are found in all kinds of places where the country is flat and treeless.” – Roosevelt

Prairie dog colonies here stretch as far as the eye can see; the entire ground is covered with burrows and mounds and there are hundreds of prairie dogs jumping up and down in excitement.

The prairie dogs are adorable rodents who emit shrill barks to warn the colonies of predators. If you have never seen them, you are in for some fun and excitement.

“Around the prairie-dog towns it is always well to keep a look-out for the smaller carnivora, especially coyotes and badgers…and for the larger kinds of hawks. Rattlesnakes are quite plenty, living in the deserted holes, and the latter are also the homes of the little burrowing owls.” – Roosevelt

Coyotes are one of the natural predators of prairie dogs and can be easily spotted near their colonies.

We saw quite a few coyotes hunting for the prairie dogs and it was great to see their interaction in nature.

The coyotes sniffed around the burrows and the watching prairie dogs started chattering and barking to warn the colony about the coyotes.

Also read Ultimate South Dakota Road Trip Itinerary: When to Go and What to See

The black-footed ferrets are the only ferret native to North America.

They were on the brink of extinction in the 1960s and due to large-scale conservation efforts, they are have been reintroduced to many environments.

Currently, they are an endangered species; 50 of their population have been are thriving in the many prairie dogs towns of Badlands National Park.

They subsist on the prairie dogs are their primary diet.

“The extermination of the buffalo has been a veritable tragedy of the animal world.” – Roosevelt

Today, you will see Bison at many places in South Dakota including the Badlands and Custer State Park.

The majestic beasts once ruled the Northern Great Plains and were very prolific.

They soon came to be hunted in large numbers for their skin and meat and were nearly on the verge of extinction.

Today almost all the bison you see are the result of many years of conservation.

Custer has the largest free-roaming herd of bison in the country.

A great time to observe the bison is during the park’s annual buffalo roundup where cowboys on horses corral the bison.

The wild donkeys or burros of Custer State Park are known as begging burros for a reason, they stop cars by standing on the road and then go from window to window asking for food.

These are the only animals you can touch or feed while in South Dakota, but even in the case of begging burros, we recommend you exercise caution while going near them.

“In a great many–indeed, in most–localities there are wild horses to be found, which, although invariably of domestic descent, being either themselves runaways from some ranch or Indian outfit, or else claiming such for their sires and dams, yet are quite as wild as the antelope on whose domain they have intruded.” – Roosevelt

The best place to see the wild horses of South Dakota is the Black Hills Wild Horse Sanctuary near Hot Springs.

Driving through the sanctuary, which is located on private land, visitors can see many of the park’s 600 mustangs galloping over the prairies.

The sanctuary is a must-visit for all wildlife and especially horse lovers.

Mountain lions are native to the pine forests of South Dakota.

They are also known by many other names including the cougar, puma, and panther.

It is the largest wildcat in North America and eats deer, rabbits, and other mammals.

Mountain lions were the only animals that we could not see during our South Dakota Road Trip.

“One of our sweetest, loudest songsters is the meadow-lark…the plains air seems to give it a voice, and it will perch on the top of a bush or tree and sing for hours in rich, bubbling tones.” – Roosevelt

We saw a variety of birds in the Badlands as well as in Custer State Park.

South Dakota has a variety of birds including wild pheasants, turkeys, meadow-larks, and eagles.

“Rattlesnakes are only too plentiful everywhere; along the river bottoms, in the broken, hilly ground, and on the prairies and the great desert wastes alike…If it can it will get out of the way, and only coils up in its attitude of defence when it believes that it is actually menaced.” – Roosevelt

We also saw one rattlesnake scuttle away on a Badlands hike and heard many rattling around in the mixed-grass prairies.

Things To Understand Before Viewing Wildlife Of South Dakota

The most important thing to remember while wildlife viewing is to not scare away the animals.

We suggest you stay quiet and patient and not make any sudden movements.

Do not approach any of the wildlife or feed them including mountain goats, sheep, and prairie dogs.

While the bigger animals can injure you if you get too close even the small prairie dogs can carry rabies.

The best time to go out for wildlife viewing is at dawn and twilight when the animals are most active. The animals also photograph very well at that time.

If you want to try taking photos of animals in the wild, we recommend carrying at least a basic DSLR like the Canon or Nikon and a zoom lens.

If that is outside your budget or needs, we recommend carrying a point and shoot with good zoom capabilities.

We also recommend carrying binoculars to see the wildlife, especially birds like the bald eagles and meadowlarks.